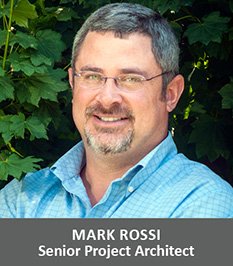 In 1997, Bachelor of Architecture graduate, Mark Rossi, was up for the task to be thrown right into the world of project management, with a variety of responsibilities and a diversity of design projects. When he started, Mark says he learned more about the practice of architecture after six months at Pinnacle than all the classes he took to gain his Bachelor and Master degrees in Architecture.

As a young boy, he had been enamored with architecture. He started with Lincoln Logs, moved into building tree forts and learned real-life building by watching his grandpa build the family cabin. Mark was surrounded with years of knowledge from family members who worked in construction to first-hand experience working for a large home building firm in Las Vegas. He’d studied hard, but also earned his chops in the “real construction world.”

With so much history at Pinnacle, second only to Peter, Mark is a wealth of knowledge and a resource for everyone on staff. He combines “old school” values with a continued willingness to grow and learn. He gets work done, and is so dedicated that he’s had to learn to let his true laid back, personality come out more in the office. Learn more about Mark’s love of fishing and background in a Q&A.