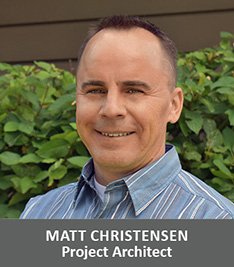 After a successful career as a Tactical Air Command Center Repairman and Embassy Security Guard in the US Marine Corps, Matt moved to Bozeman, Montana where he started drafting at his first architecture firm. With a little experience under his belt, he went on to graduate first in his class at Montana State University with a Masters in Architecture and a B.S. in Environmental Design.

After college, Matt spent over a decade working in Seattle, refining his craft through the design of K-12 schools, multi-family, and commercial projects. In 2014, he relocated to Kansas, where Matt focused on the design of industrial and commercial facilities for tenants such as Kubota, Excel Industries, Horizon Global, and Jet.com. Most recently Matt managed a $3.5M, 5-year U.S. Government A&E IDIQ contract with Whitman Air Force Base. He was the lead on all projects issued under the IDIQ including; conceptual design for a new indoor running facility, drainage improvements, a new FEMA storm shelter, a new all-weather football field, multiple building renovations and a new Force Support Squadron (FSS) Annex building with office and classroom space.

In his free time, Matt enjoys working with his hands and is an avid woodworker who also likes to tinker with vintage cars. Matt, his wife, and their dog are excited to be back in the Pacific Northwest and explore the Central Oregon lifestyle.